Our homemade bratwurst is handmade according to an old recipe by the house butcher “Löve Will” from Esch near Elsdorf by chefs from the Haxenhaus kitchen and filled in lamb strings.

The story of our Bratwurst

The history of sausages is centuries old and has been consumed across generations, borders and continents. The flavours of sausages are as varied as the varieties, the production or the methods of preparation. There is hardly a child in this world who did not know the sausage as a treat from his children’s kitchen.

Once upon a time …

Once upon a time there was a little boy. Already early in my childhood I got to know the sausage. Fortunately not only as a pleasure, but I was also shown how to make it, the sausage. How it is sausaged. Already at the early age of only four years I was often allowed to accompany my godfather Willi. He went along when he made house slaughters in private houses in our hometown. In the country at that time almost every household fattened a pig. 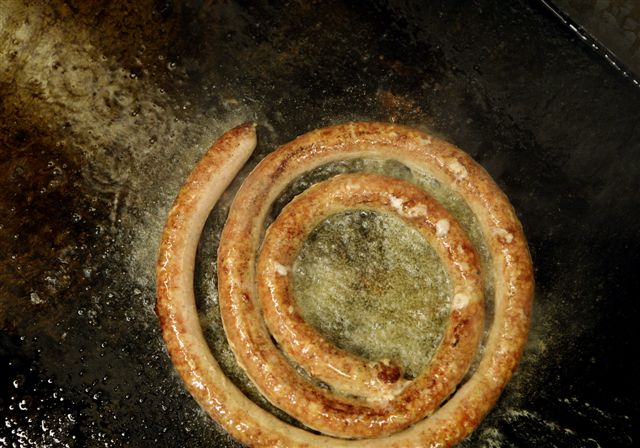 I was allowed to help him when it came to portioning juicy pieces of meat, preparing ham for drying, dividing chops, cooking the innards and preparing a tasty sausage soup. But the most exciting thing for me was when the fresh meat was turned by the wolf; once, twice and sometimes even three times; until the sausage had the right grain size.

The subsequent seasoning was my uncle’s thing, and he didn’t like to be looked over his shoulder. After all, seasoning the sausage properly was an art and every butcher had his own recipe. Fascinated I always watched as he unerringly threw a handful of sausage meat with a full plop into the open neck of the sausage machine. And when that happened, then came my part. I was put with my thin little legs behind the sausage machine on a chair and had to turn then with both hands the machine crank.

The year was 1953, the lost world war was still omnipresent and the momentary happiness of the people at that time was to be satisfied in peace. That was the time in which I internalized the feeling for sausage during the house slaughtering. When Uncle Willi hummed and let the sausage meat flow into the clean lamb’s intestine, constantly admonishing and driving me:

Then I saw how the sausages flew through his hands, were turned by me and put into endless loops by him.

Where there was slaughter, there was always a feast – always. People laughed, joked and drank one or two schnapps or two. The people were full of joy, because one looked forward to the delicacies that were soon to come and when one saw how the fresh sausages were looked at, one guessed that it would not be long before the first sausage would end up on the grill or in the pan.

Nowadays, in the age of earth-encompassing travel, of global information possibilities, we can be happy that it is Bratwurst that gives us a lot of culinary friends from all over the world – year after year. Hardly any traveller or visitor who comes to Germany because of our culture and way of life has not enjoyed one or the other, or perhaps even several fried sausages. And with today’s reflection on the regional, on the local cuisine, a symbiosis is formed between here and there. Far away and yet at home.

The sausage, the bratwurst has also developed into a delicacy in this country.

These characteristics unite the numerous Bratwurst hungry in the Haxenhaus like nowhere else.

In a century-old masonry, on the axis of two ancient trade routes, to one the Rhine, which connects north and south and on the other the old Kaiser Straße, which led from Antwerp to Königsberg, today people from all over the world enjoy freshly prepared bratwurst, bratwurst according to the family recipe of lion Will, my godfather.

Every week hundreds of metres run through a sausage machine in the Haxenhaus kitchen, which is still turned with a hand crank. Just like a long time ago.

Served in different lengths; 1 half meter or 1 whole meter long for 2 people, each with sauerkraut and fried potatoes. And when we look at our guests today, we see similarly satisfied faces as in the days when I met them: the Bratwurst.

Have you got the desire and would like to enjoy our daily fresh, homemade Bratwurst?

This website uses cookies to improve your experience while you navigate through the website. Out of these, the cookies that are categorized as necessary are stored on your browser as they are essential for the working of basic functionalities of the website. We also use third-party cookies that help us analyze and understand how you use this website. These cookies will be stored in your browser only with your consent. You also have the option to opt-out of these cookies. But opting out of some of these cookies may affect your browsing experience.
SAVE & ACCEPT